Tony Parrotti and Laura Fraser moved from New York City to Damariscotta in July 2021 and they brought their bespoke tailor business, Tony Shirtmakers, with them. (Nate Poole photo)

There’s a new tailor in town, and while he learned his trade in Brooklyn, the pieces he crafts are often inspired by the Maine outdoors.

Since 2014, Tony Parrotti has owned and operated Tony Shirtmakers, a bespoke shirt and jacket business that he and his wife, Laura Fraser, brought to Damariscotta in July 2021.

Something like a tattoo artist, each shirt or jacket Parrotti designs is custom-made in collaboration with the individual client, making each garment a one-of-a-kind piece that reflects their own tastes as well as Parrotti’s artistic style.

Much like a high quality tattoo, the price points for bespoke clothes are steep and the wait time for a garment can span months, but for many it’s worth the wait.

“It’s just… (a) very discerning, thought-out way to add pieces to your closet and not have a closet filled with things. It’s just the things that you love, and you love them because you were able to build them from the start, ”Parrotti said at his studio on March 29.

Prior to moving to Maine, Parrotti and Fraser both worked in the New York fashion industry for years. Fraser worked for a name brand fashion business while Parrotti operated Tony Shirtmakers in Brooklyn.

Around six or seven years ago, the two of them began taking road trips to Maine and soon decided that they wanted to move to the state.

“Our plan was to go to all these different places but we just kept going back to Maine and exploring Maine because it’s so big and beautiful,” Parrotti said.

They’d originally thought that they would only own a summer home in Midcoast Maine and work in New York the rest of the year. However, when the pandemic began in March 2020, the pair realized that they no longer had to live in New York to do their jobs remotely. They began to look for a home in the pine tree state and were lucky enough to find a home close to downtown.

“We’re like… pinching ourselves that we live here every day because… we’re so used to a very different daily lifestyle,” Parrotti said. 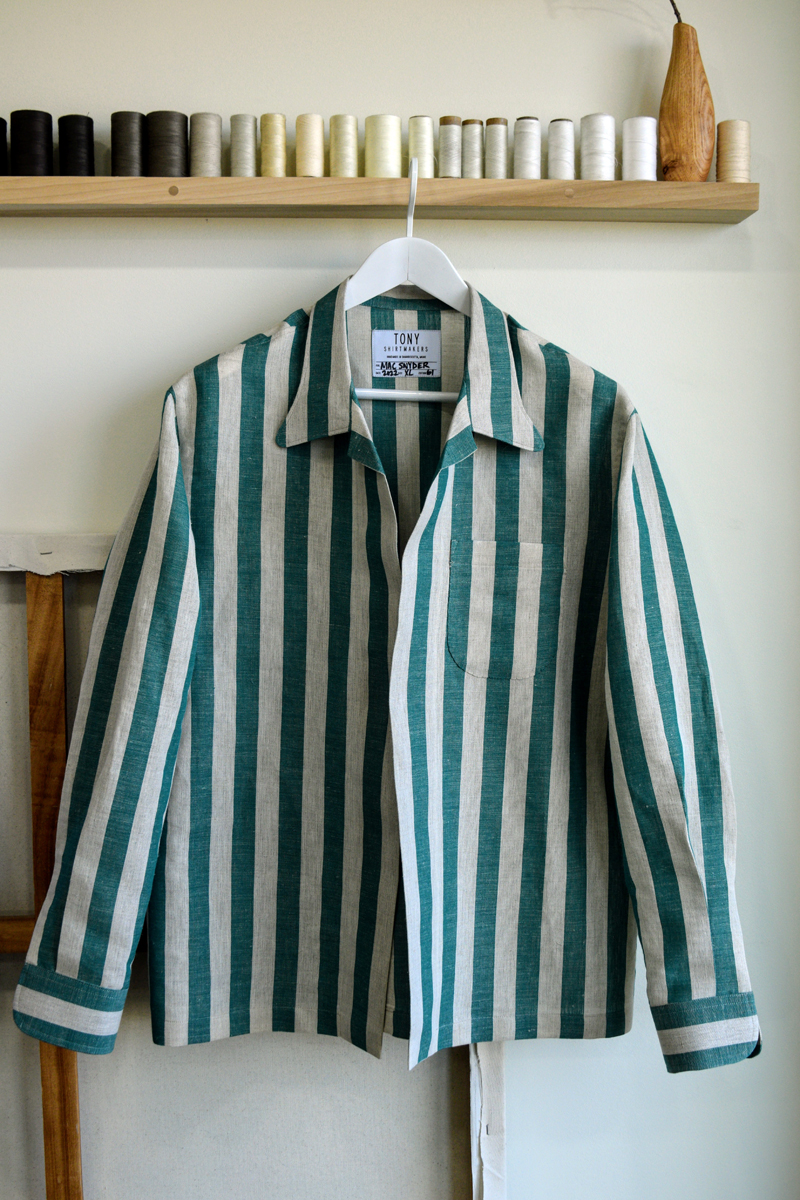 One of the many in-process shirts that tailor Tony Parrotti is creating in collaboration with his clients. (Nate Poole photo)

When the pair made the move to Maine, Fraser had reached 16 years in fashion retail, merchandising, and creative direction with a women’s design house, and she decided that she wanted to step away from the world of trend-based fashion to partner with Parrotti full time.

“I was just ready to do something new, which was very scary for me,” Fraser said. “There’s something really appealing about a small business and knowing everybody.”

In New York, Parrotti had employees who focused on production work for private label brands to bring in additional revenue, but during spring 2020 quarantine he realized that he really wanted to focus on making every garment himself and engaging with each customer he was making a shirt for.

“I realized how important actually physically making the shirts was to my happiness as a business owner,” he said. “Obviously there’s a ceiling to that because I can only make so many shirts per year, but I also think that’s what makes it special.”

Well before he’d even thought of making clothes, Parrotti was interested in making a living with his art.

“I always wanted to have my own business doing something creatively, and it didn’t surface that it was going to be fashion until later on in college,” he said.

He started making shirts with his mother’s sewing machine when he was attending the Parsons School of Design in New York because he couldn’t find clothes that he wanted to wear elsewhere.

However, Parrotti did not simply learn how to make shirts from someone else, he learned by systematically deconstructing a shirt with a seam ripper, taking photos and notes every step of the way. He would then put together a shirt based on that process, over and over again, until he noticed improvement.

After Parrotti earned a business degree in design management, he worked in the business side of fashion before he took a position with a tailor who helped him learn the fine finishes and skills associated with being a formal shirt maker.

“For four years, I was essentially sewing three, four shirts a day. That’s how you get really… good, ”he said.

After four years as the lead shirt maker, Parrotti started Tony Shirtmakers in 2014.

Parrotti’s general style very much represents a blend of New York fashion and Maine-inspired, outdoor-oriented utility. His clothes are designed to be loved and worn in, rather than displayed or cherished.

“My shirts are heavy, weighty, they can take a beating,” he said. “When people buy it, we’re always like, ‘Don’t be precious with it. You got this, wear it all the time. That’s what it’s for. ”

While Parrotti’s clothes are made to be beaten up, he still uses all of the techniques that are typically used to make a formal shirt and he applies them to lifestyle pieces like shackets, barn jackets, camp shirts, fly fishing jackets, and anything else a client might commission. 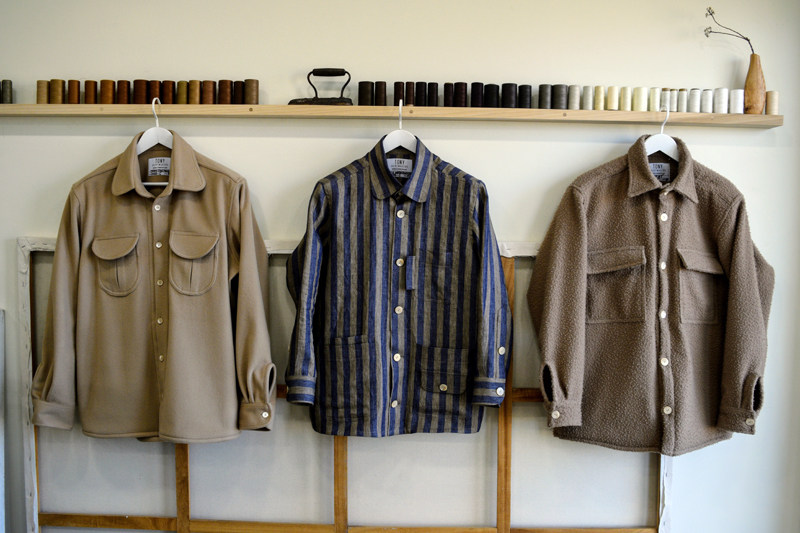 Tony Shirtmakers owner Tony Parrotti creates each one of bespoke shirts and jackets with his own hands using skills that he honed in the New York City fashion industry. (Nate Poole photo)

“It can be worn somewhere where you want to look polished but not too dressed up, and it can also be worn… on a hike,” he said.

Fraser said that Tony Shirtmakers sources the highest quality fabrics from all over the world, often focusing on what a country is well-known for. For instance, they source moleskin and corduroy from London, wool from Italy, and denim and flannel from Japan.

“We’re choosing the best of the best for each specific type of fabric, and that’s I think what elevates everything,” Parrotti said.

Parrotti also uses deadstock fabric, or fabric which is no longer produced, for lots of his garments. Deadstock fabric is very unique, old, and very limited in its availability, making it particularly useful for those who want a jacket or shirt that couldn’t be replicated anywhere else.

Parrotti and Fraser said that they have clients that will come to them from up and down the east coast that they connected with in New York, but they have also been pleased to find a market for their services in Maine as well.

“We’ve been super surprised and very grateful and excited that so many people in Maine have been interested in coming and getting shirts made,” Fraser said. “We basically have someone coming from Maine every week at least.”

With the summer months ahead, the couple is excited to welcome back seasonal Lincoln County residents and introduce them to a new way of finding clothes. Fraser said that some have already scheduled appointments months ahead of time.

“We just feel really grateful right now that we’re living off of shirt making and that we live in beautiful Maine and (that) people keep asking us to make things,” she said.