MONROE, CT – Amanda Bean and other women worked at a check-in table at Wolfe Park Tuesday, signing-in volunteers, giving them a T-shirt and assigning them to teams for the community build of The Wolfe’s Den Playground.

Bean, who is the volunteer coordinator and a board member for the Monroe Playground Foundation, a nonprofit spearheading the project to replace the old wooden Kids Kreations Playground with The Wolfe’s Den, said 50 people showed up to work that morning.

Under a tent, Melanie Kohler and Leah Lane volunteered at the child supervision area, allowing other parents to participate in the build. There, children ages 2 to 10, played games, did crafts, ate snacks and took part in physical activities with hula hoops and games like of tag.

“We have mini-field trips to the other playground that’s still intact,” Kohler said of the small playground on the hill. “And we have nature walks.”

When older kids come after school, they can have meals and do their homework.

The construction site opened at 7 am and the volunteers arrived at 8 am The first crew had breakfast and worked until lunch time. Each of the six construction days will be broken up into three shifts with work running from 8 am until 8 pm 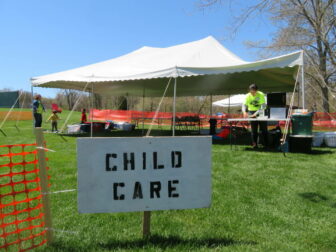 Keene ate at a table with his wife, Lisa. Both wore orange, captain T-shirts.

“Everyone who registered ahead showed up and there were some walk-ins on top of it,” he said. “We’ll take an hour, a day, a week – whatever you’re willing to give. We welcome everyone. It’s just great to see people who want to make this project a reality. ” 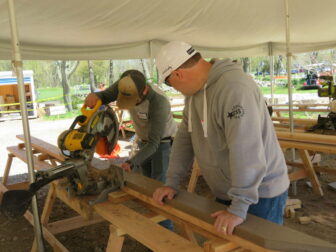 Keene said the playground should be completed within six days, but volunteers will be needed every day to get the job done.

Two construction consultants from Leathers & Associates taught 12 captains how to complete different sections of the playground and each captain led a group of volunteers.

Justin Fowler, who has been with Leathers & Associates for 18 years, served as a construction consultant with Bill Hugill.

“We basically delegate the tasks. Then we do quality control, ”Fowler said. “It’s really smooth. The company has been doing this for 51 years. Every playground is different, but the process is the same. ”

Fowler praised Keene and the MPF committee for completing the pre-construction work, allowing them to hit the ground running Tuesday. 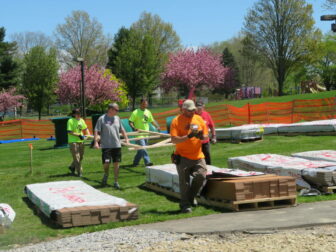 Keene said 40 volunteers came out for one weekend, April 30 and May 1, to do the site prep, which involved digging holes, filling wheel barrows with dirt and moving the loads to other areas of the site.

“We met our goal,” he said. “The site prep was the hardest work on this project. If you came for that, this is easier. ”

Fowler said the new playground should really start taking shape by day four of the build.

“We’d like to get all the posts in the ground, vertical and straight, and start framing between the posts,” Fowler said of Tuesday. “We have jobs for everyone and we can always use more volunteers. Many hands makes for light work. ”

Keene credits Jason Bean, who is married to Amanda, for the organization of the construction site. Jason’s occupation is project supervisor for Prutting and Co. Custom Builders. He is serving as site captain for the playground project. 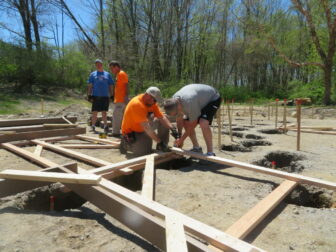 Buzz saws were set up at work stations under one tent and other work tables were set up outside the construction zone.

Volunteers carried beams and other components to different areas of the site and used drills to connect materials for the frames.

“One night, Dan asked if I could help out a little and a little become a lot,” Jason said of his growing involvement with the project.

Of the volunteers serving on his team, Jason said, “they’re learning. They’re eager. They’re happy. It’s day one and morale is great. We need help and there’s a job for everybody. ”

Will Heher, a father of two young children, ages two and four, did framing and built roofs with three other volunteers.

“We loved the playground before and we just wanted to see it be where it was in the’ 90s, when the playground was originally built, so our children can have something of their own, ”Heher said. “We were on the playground all the time, so I couldn’t sit back and let everyone else do the work.” 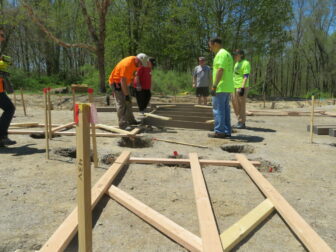 Among his team, Heher said there has been “lots of fun, jokes and smiles.”

Megan Nathanson, who has a nine-year-old daughter and a seven-year-old son, both at Fawn Hollow Elementary School, got involved with the playground project to make new friends. Her family moved to Monroe from Trumbull in 2019.

This is Nathanson’s second community build.

“I remember being a kid when they built the playground at Compo Beach,” she said of growing up in Westport. “As a kid, whenever you played on it, you remembered seeing your parents and your neighbors building it.”

Aside from volunteers, Keene said The Wolfe’s Den Playground project could still use donations. To donate, click here.

“We’re in good shape for a project of this scale,” he said. “But a contingency never hurts and the money will be put to good use. Just yesterday we spent $ 4,000 at Home Depot. We won’t know we’re done until the playground is built. ”