Oppo believes that producing high quality products is the best way to win consumer loyalty and has implemented strict quality controls across the organization. At the heart of those is the Oppo QE Reliability Lab that was established in 2017 in the factory at Greater Noida, India.

Seemingly simple decisions actually take a lot of research, planning and development. For example, the Oppo F21 Pro launched a couple of weeks ago with a “Sunset Orange” leatherette back. But that’s the end of the story.

The story starts with several thousand different textures that the Oppo designers examined. Six were short-listed and sent to market research. Of those, a lychee grain leather texture was chosen. Actually putting it on a phone required the creation of a “fiberglass-leather”, which could be used as the back panel without requiring internal supports. The manufacturing process took a lot of work to figure out as well.

The fiberglass-leather material is tested for durability by rubbing it with an alcohol-soaked pad, a rubber eraser and a piece of denim 5,000, 10,000 and 200,000 times, respectively. 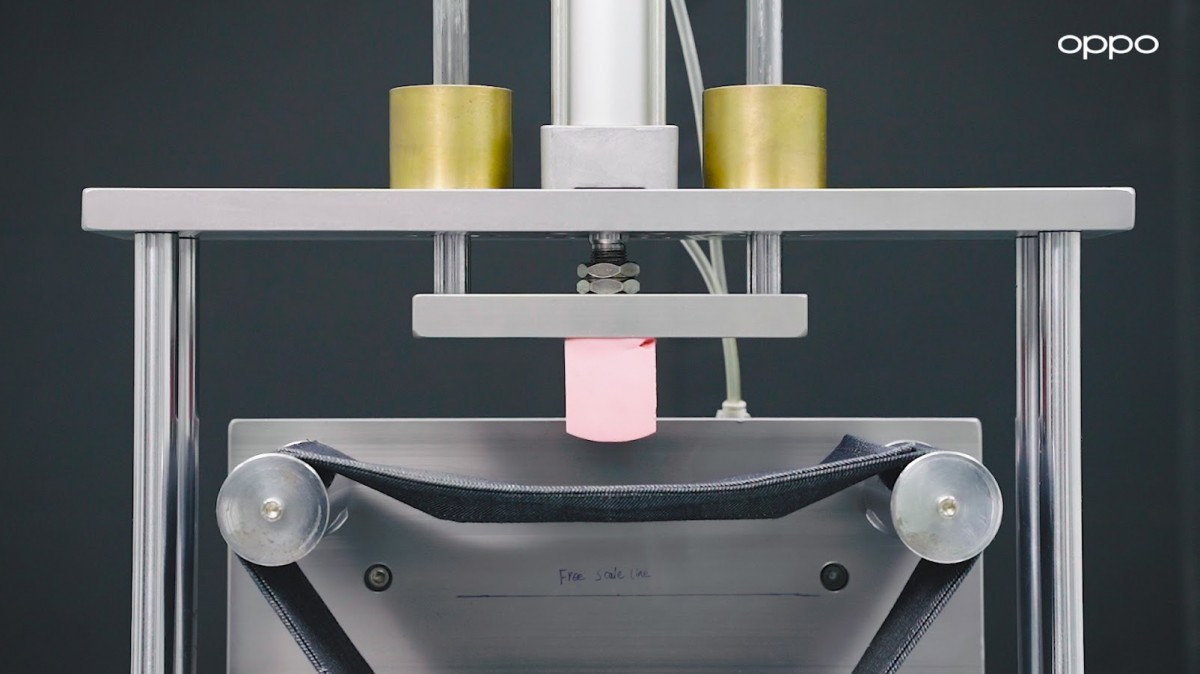 Can your jeans rub through the phone’s exterior?

Each new model that Oppo creates has to undergo a series of tests that simulates years of daily wear and tear and various accidents. The lab is looking at how much damage a phone can take before it breaks, but also what causes cosmetic issues.

The simple drop test is made harsher than the industry average, letting phones go from 1m height instead of 0.8m. The phones are dropped on all 6 sides, 8 corners and 12 edges 12 to 24 times. And to wrap things up, the phone gets dropped from 1.5m in three extreme tests. 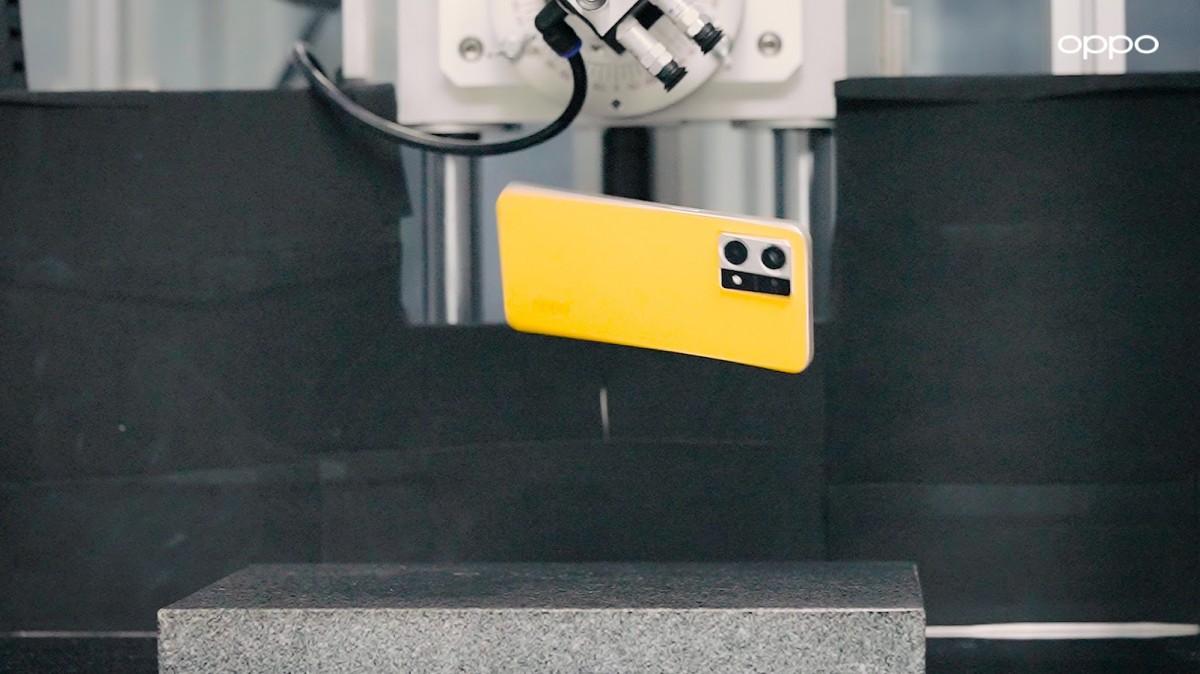 An Oppo F21 Pro in the middle of a drop test

Height isn’t the only concern, small drops on an abrasive surface can scuff up a shiny new phone. Oppo uses sandpaper and the phones don’t get the benefit of a screen protector or case.

At OPPO, our products go through rigorous testing processes to deliver the best quality in all aspects and the stunning # OPPOF21ProSeries has successfully completed it all, providing you with a #OPPOQualityPromise.
Buy now: https://t.co/pCd5DDpcte pic.twitter.com/6nhXZRhVGP

Next, even more drops – the phone is placed in 1m long case that spins at 3.5 revolutions per minute. At the end of 15 revolutions, it has experienced the equivalent of 150 falls from 1m. 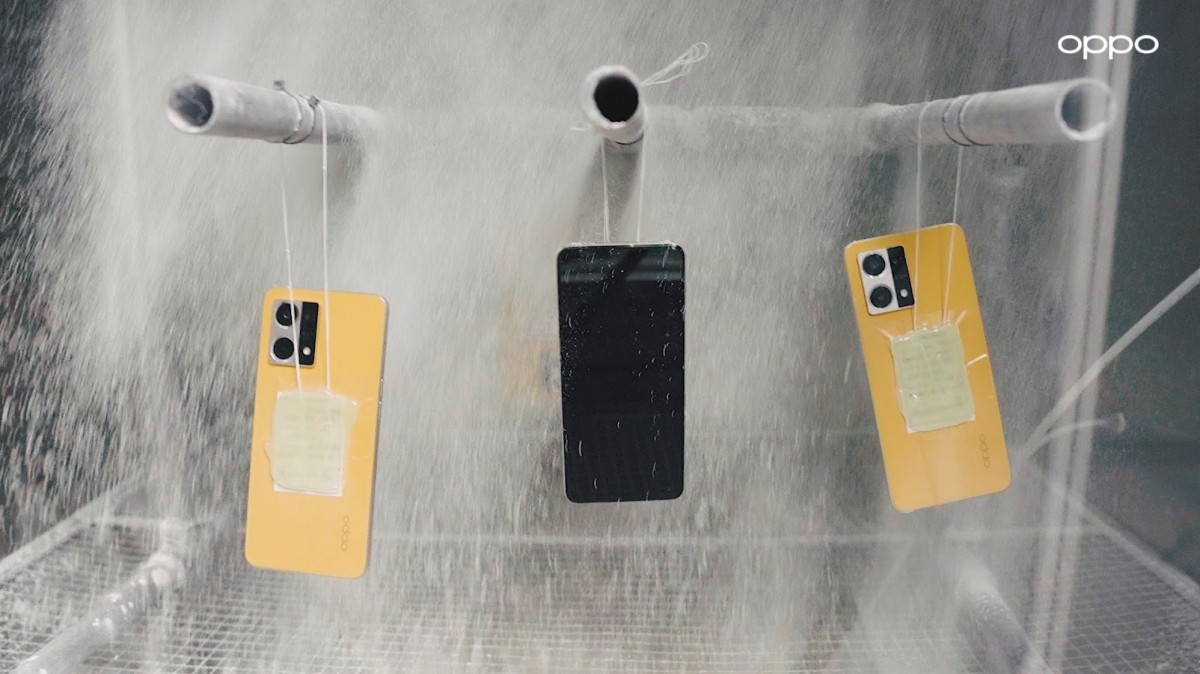 With kinetic tests done, waterproofing is the next item on the agenda. Oppo simulates a heavy rainfall, 10 liters per minute, falling at 75 °, aiming for the IPX4 rating. The F21 series of phones was also dunked under 20 cm of water for 30 seconds and then wiped dry. After three days, the test unit is disassembled to check if any water made its way in and corroded the internals.

The quality of OPPO products is one of our top priorities.
The # OPPOF21ProSeries adopts IPX4 standard for water resistance testing and they are also placed underwater at a depth of 20cm for 30sec to deliver #OPPOQualityPromise.
Buy now: https://t.co/pCd5DDpcte pic.twitter.com/L2t7LD2o3R

Liquid water isn’t the only killer, electronics don’t like high humidity either. So, in go the phones into a special chamber that maintains specific temperatures and humidity levels for several days. One of the test keeps the phone at 95% relative humidity at 65 ° C for 14 days (instead of the standard 3 days). This is done both with the phone on and off.

The temperature shock test goes on for 300 hours (four times longer than the industry standard) and tests whether the devices can survive temperatures as high as 75 ° C and as low as -40 ° C. 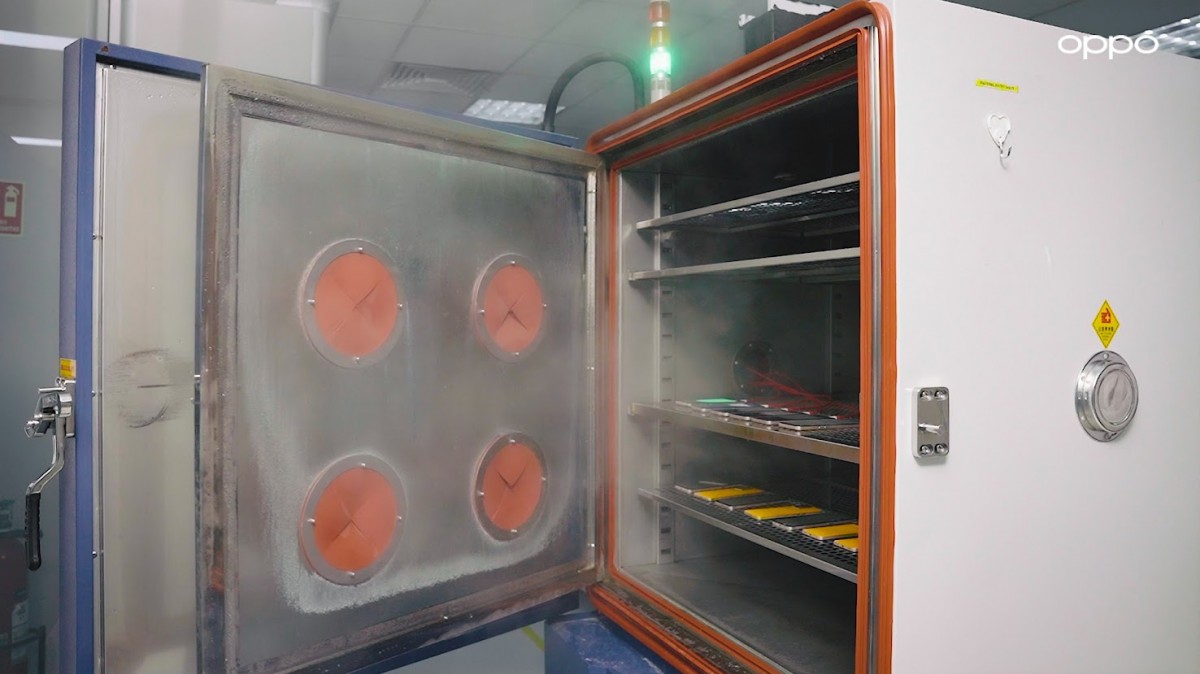 Most water tests are done with fresh water, but salt water is more destructive. So, the Oppo F21 phones are splashed with salt water (5% salinity) for 2 hours, while being kept in a hot, damp environment (50 ° C, 95% RH). A passing grade on this test requires that the phone remain fully functional and that they show no signs of external damage.

Even the phone’s owner can be damaging to the device’s exterior. The Sweat Test involves wrapping the phone in cloth that was soaked in artificial sweat and leaving it for 24 hours. A selection of cosmetics are also tested for 24 hours to see if any of them will affect the exterior. 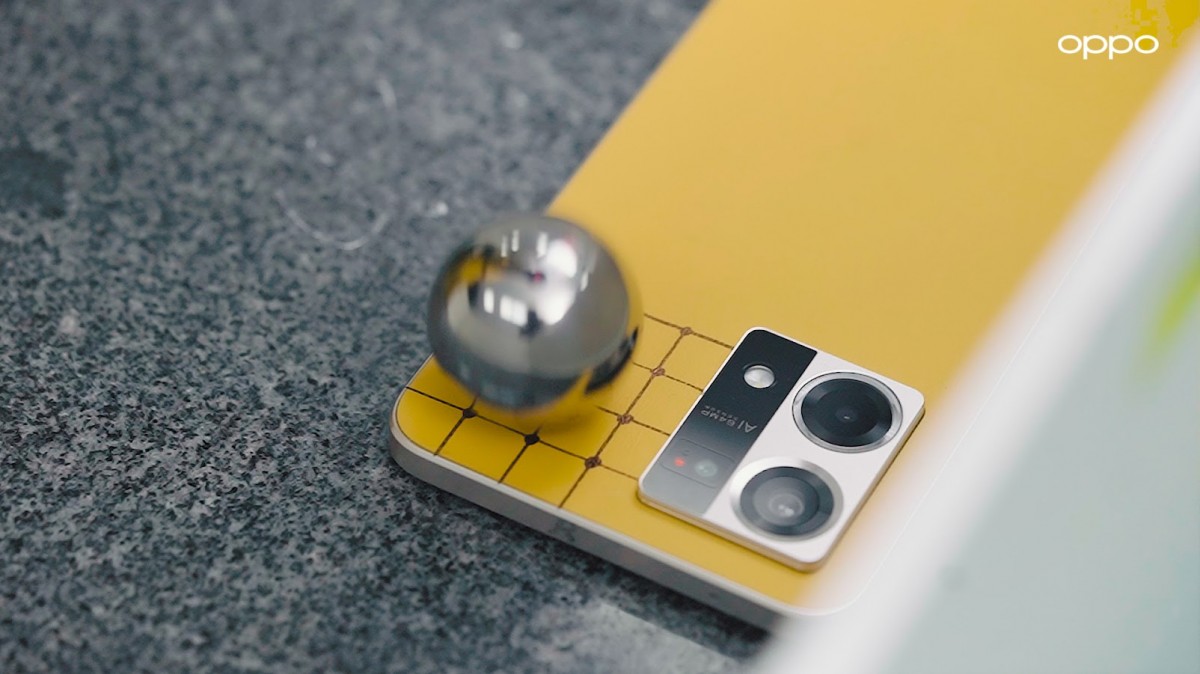 Some of these tests are performed on all Oppo phones, others are specific to the F21 series – the leatherette tests, for example. The phones also have an Orbit Light, that is a ring of RGB LEDs around the rear camera. Those are tested for uniformity and to ensure that the have a lifespan of over 50,000 hours.

With upgrade cycles getting longer, it’s great to see an increased focus on durability. Oppo’s tests ensure that the devices will keep working even if you are a klutz and that they will look good when it becomes time to sell them on to a new owner.