“More intelligent than you think.”

A first-of-its-kind robot that can recognize face and see dreams – like a human. 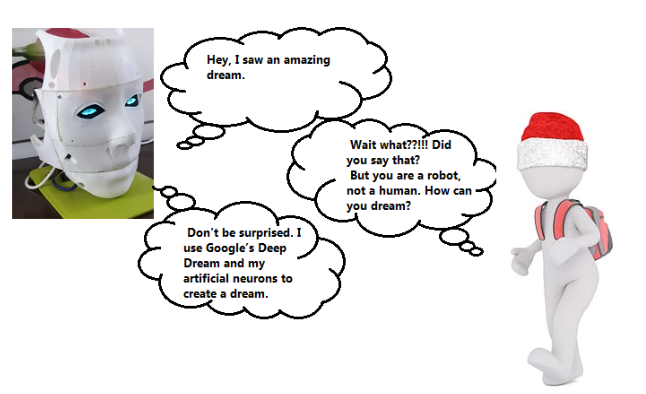 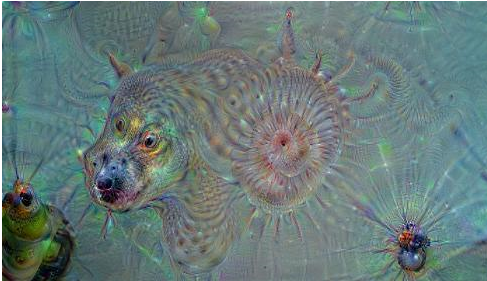 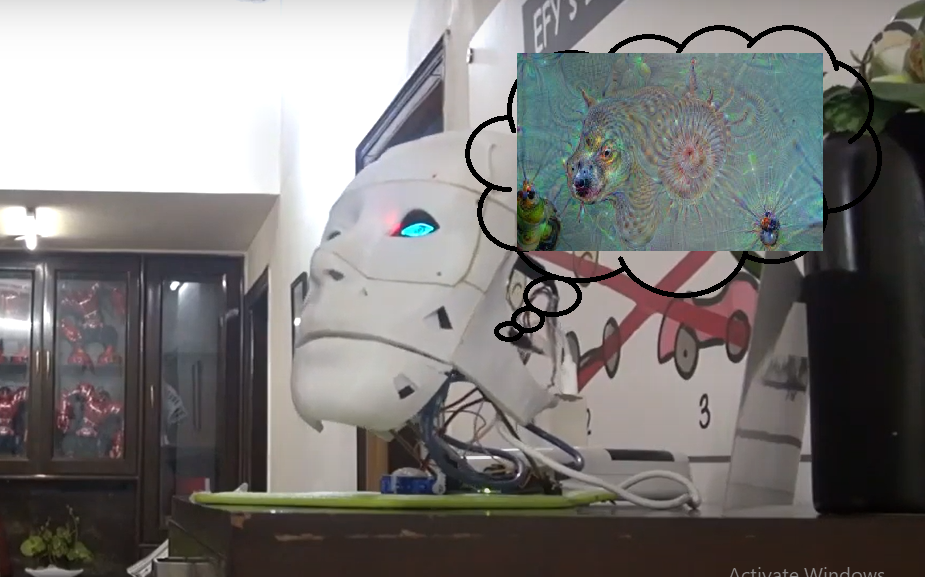 We humans have the capability to speak, recognize feelings and emotions, and even see dreams, which makes us different from machines. But does it make us more intelligent than them? Can machines like robots also acquire this capability? If yes, then this can blur the line between how humans and robots think.

How can these intelligent robots be used?

As artificial assistants in the workplace, as companions for the elderly and children, for welcoming guests in hotels – these intelligent robots can have multiple uses.

Keeping this in mind, I have decided to make an intelligent robot using several open source-tools and libraries. And so can you. I have used the InMoov robot face mask. You can also use this robotic face or any other of your choice.

How does this robot work?

Using Google’s open-source Deep Dream library, a camera takes a picture and then creates dreams based on it.

Next, I have used a Ai and Python to make a robot to recognize the face and talk to you

Now, let’s start our project by collecting the following components:

Our project includes two different features, for which we need to create a basic setup of both deep dream and Face recognition.

For emotion recognition, we need to setup the following libraries in Raspberry Pi.

To install the above library, open the terminal window in Raspberry Pi and then run

After this we need to swap the file size. To do so, run the following command:

Now, we will install the Face recoginition library. To do so, run the following command in the terminal:

For deep dream, we need to install the following modules in Python.

You can also follow this link for deep dream installation on Raspberry Pi.

We have now completed the basic setup of the libraries so now, let’s write the code for real-time Face recognition.

First, we need to download OpenCV, OpenCV contribution and Face recognition library folder. To do so, open the terminal window and then run the following commands in the terminal:

This is to recognize the person in front of the robot (known or unknown). In this code, we will import 3 modules: face recognition, cv2 and numpy. We will create different arrays for recognizing faces and names. Make sure to write the image file name of that member for correct face recognition.

In the next part of code, we will try to match the face that has been captured by the camera with the array of known faces. If the face matches, then the code will run the espeak synthesizer to speak the person’s name using the syntax ‘espeak.synth ()’ as in the pic below (See Fig.12)

Then open the PsyCam folder and change the file path for dream creating image in utlities.py to the same path where we save the captured frame of emotionrecog.py image.Now in the PsyCam folder, create a new Python file and then create a script that runs the testpsycam.py file in certain intervals of time and then makes it go on sleep mode ie off / on.

To see the dream image created by the robot, open the dream folder that is situated in the psycam folder.

Our coding is now done.

Connect the camera to Raspberry Pi and the OLED display with Arduino for eye motion, as given in Part 1 of this project.

After setting and saving all the codes, it’s time now to test the features of our robot. Run the face.py and run.py scripts, and wait for after a few seconds. The screen will then start showing the face and the robot will start talking according to the face it will detect (Refer Fig 14).