My opinion is that the Beelink SER4 4800U is a powerful and very compact mini PC. This computer is sufficient for professional use in many applications and allows you to run several demanding games, without breaking the bank.

It seems as if 2021 and 2022 are going to be the 2 years that could change the world of computers, in terms of size, affordability and of course, performance.The trend now wants some of the most powerful mini PC’s in the world to be able to fit in the palm of our hand (much like today’s Beelink SER4), combined with significant processing power coming from Intel but also AMD’s Ryzen chipsets. And while there are a few Ryzen mini-PCs – less than those powered by Intel, more and more OEMs are beginning to utilize AMD Ryzen CPUs in their mini-PC lineups.

If you’re in the market for a fairly powerful little beast – with some punch in everyday usage, then the newly released SER4, which comes with a not so power-hungry Ryzen 7-4800U SoC, could easily become your next best buy! 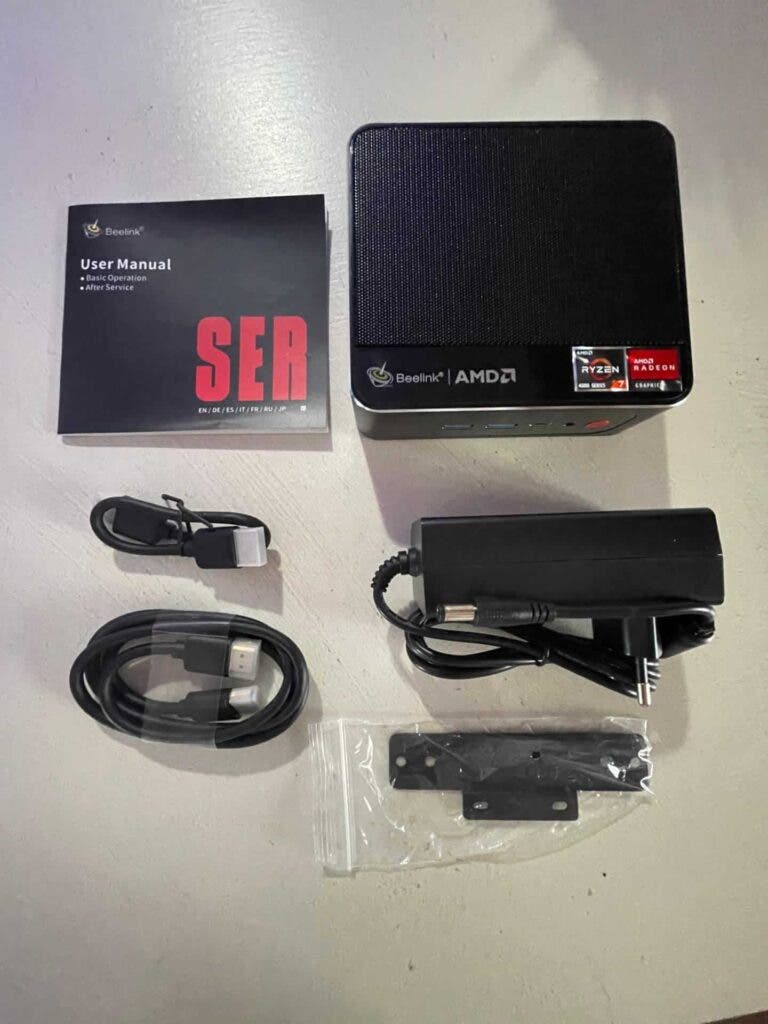 I have to admit that what Beelink sent me, really caught my eye. The SER4 is great looking and surely comes with significant processing power: 32GB of DDR4 3200MHz RAM and the Ryzen 7-4800U chipset inside. It’s not big – nor large, but it surely is one of the most attractive mini PC’s out there. It comes with aluminum (and metallic) built and a perforated top panel that dissipates heat easily. It also credits the device with a more premium (classy) look. For those who prefer… stickers, then there are 4 of them outside of the device: the AMD and Beelink logo, along with the Ryzen 7 and Radeon GPU logo. 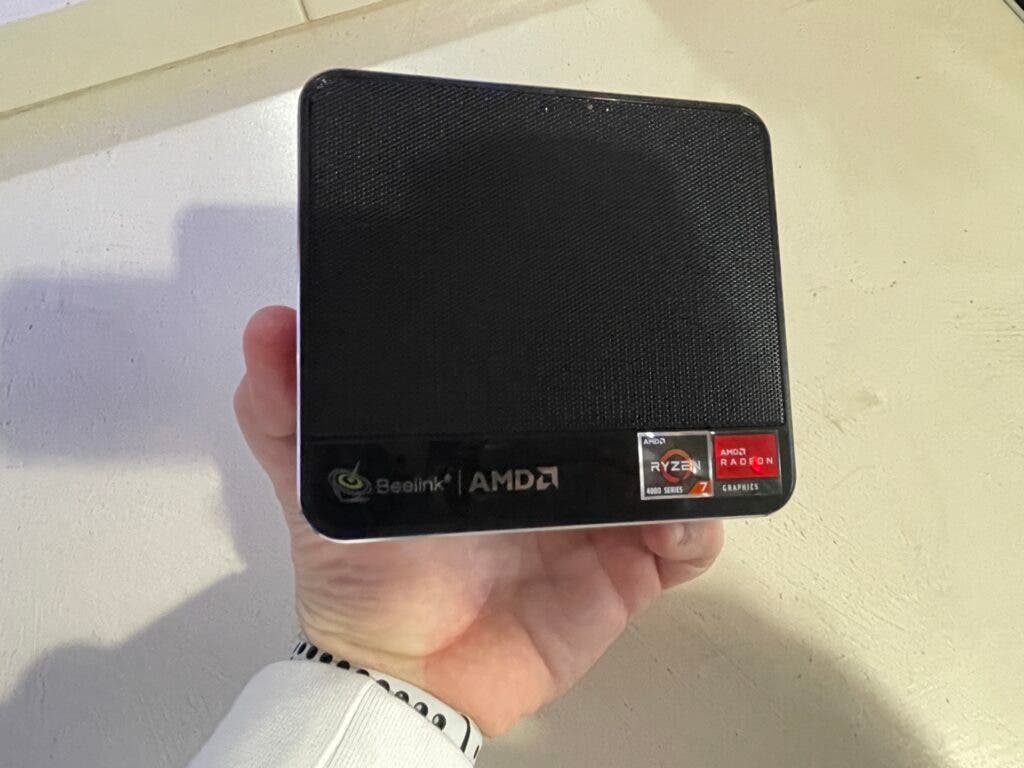 As I previously mentioned, the SER4 comes in black with 2 red grilles on its side that help heat dissipate easily, and fully metallic chassis. It packs an excellent build quality, with no squeaky sounds at all. It measures 126 * 113 * 42 mm, so it can easily fit behind my Xiaomi curved monitor with no issues at all. If you literally have no room on your desk, the VESA mount included in the retail box can help you attach the mini PC onto the back of the monitor. Thus making it completely disappear from the surroundings. It weighs only 455g, so moving it around the house or taking it on a business trip will be easy. If you have monitors in both your office and your apartment, this thing should be much easier than carrying a laptop. 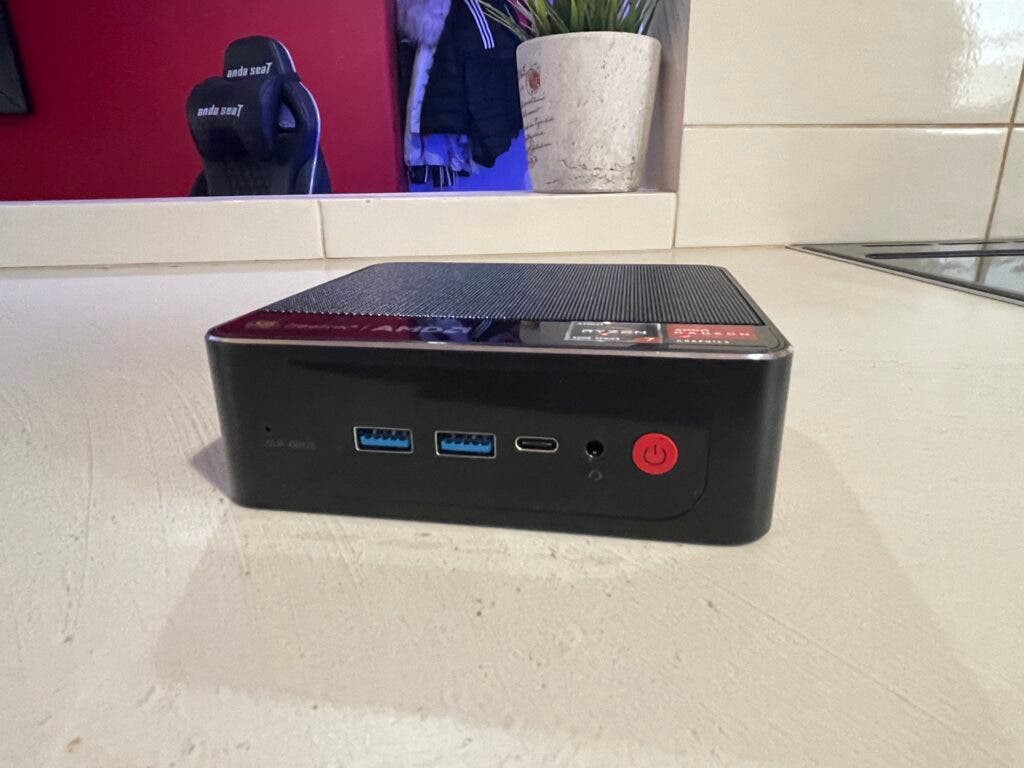 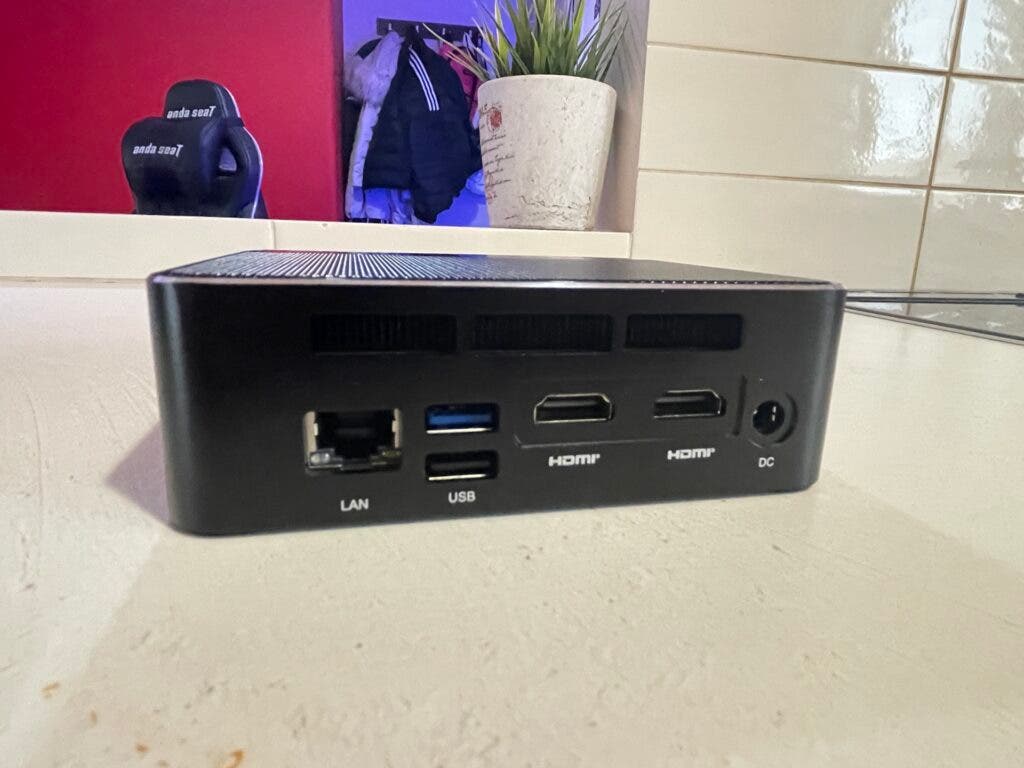 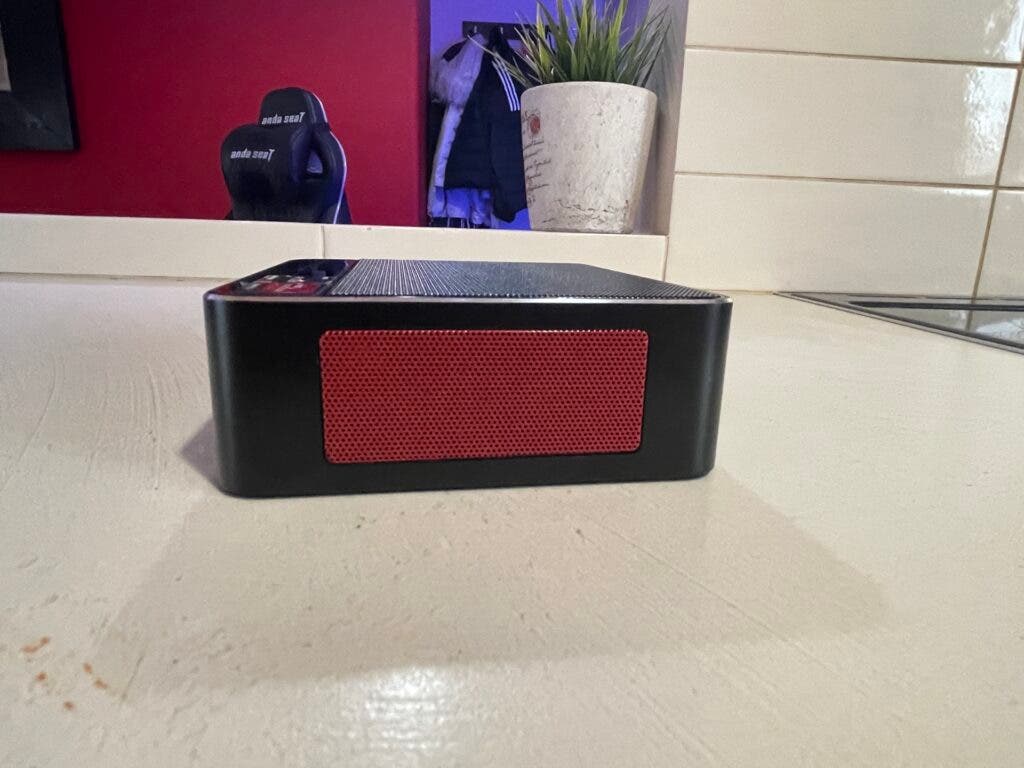 If you’re good at math, then you might have noticed that the SER4 comes with 3 HDMI ports. This means that it has the potential to drive three 4K displays at once. Running multiple screens in a retail, commercial or corporate environment is one of the SER4’s strongest features. Sorry to say that it doesn’t have any Thunderbolt port, so if you’re into eGPU’s then it’s a bummer.

This small beast may not pack the most modern AMD CPU, but it does give a punch where it’s needed. The AMD Ryzen7-4800 processor that lives inside is based on the 7nm Zen2-based APU with 8 CPU cores, 16 threads, as well as an integrated Radeon Graphics GPU. There’s also 32GB DDR4 3200MHz dual-channel memory and a 500GB m.2 NVMe SSD in the unit that Beelink decided to send to me. Although the Ryzen7-4800U is a mobile chip released more than 2 years ago, it is still mighty impressive, and benchmark scores told the story. 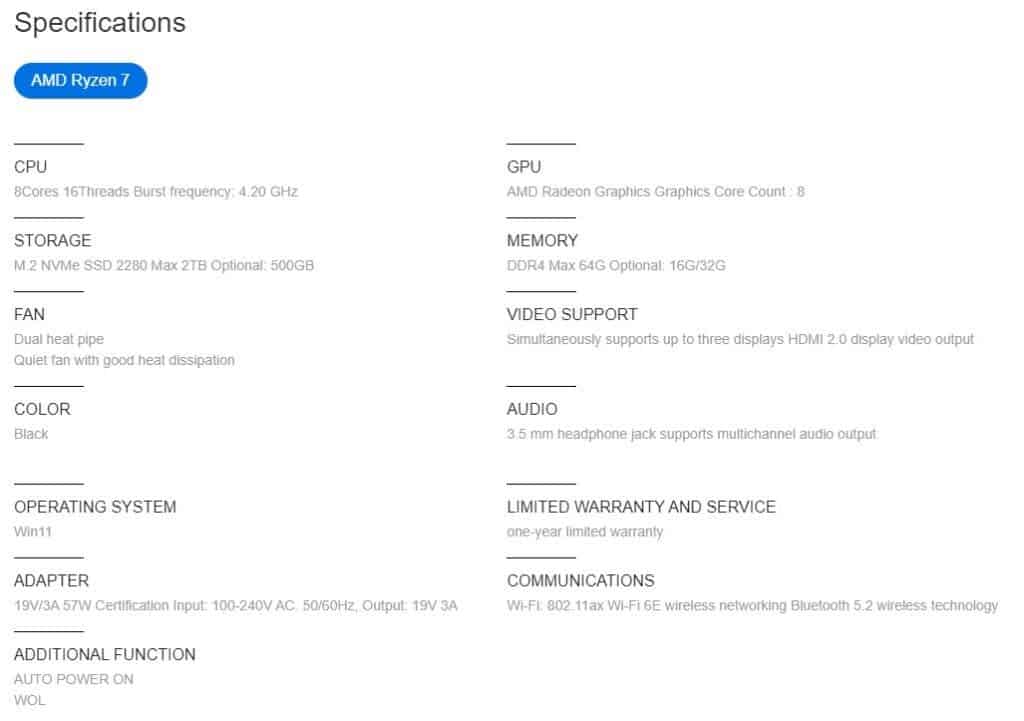 The power consumption for the stock configuration was measured as follows:

In everyday use, the difference in single-core performance will go largely unnoticed. If you want to edit some 4K videos, then the multi-core ability of the AMD chip will pull through. The m.2 NVMe SSD may not be the fastest in the market, but at nearly 2,000MB / s for reading speed, it’s ideal for booting Windows and all your favorite productivity apps. 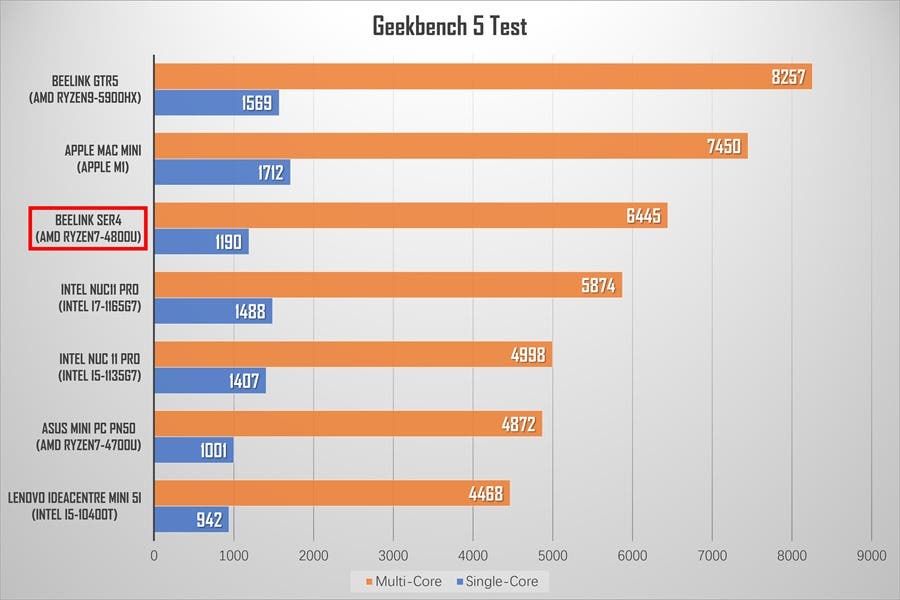 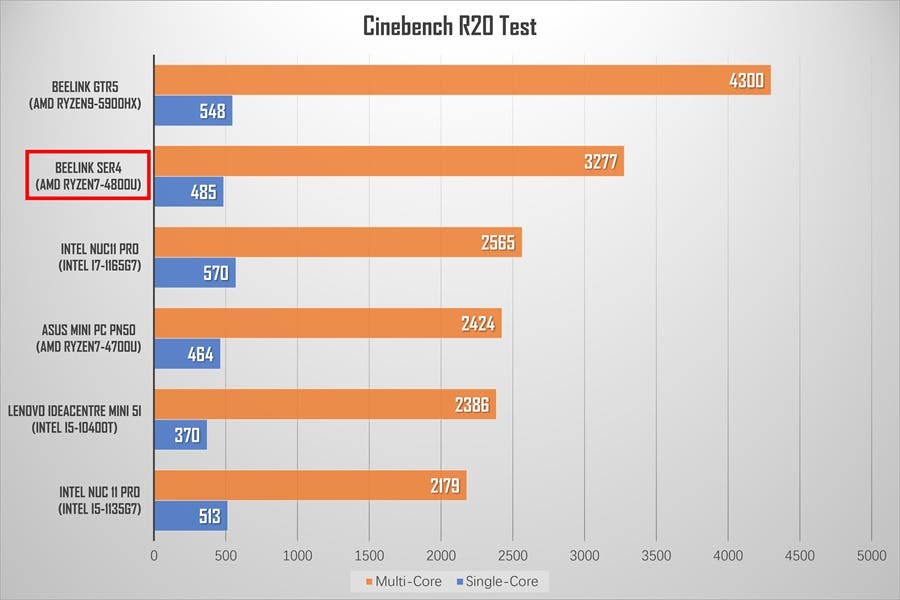 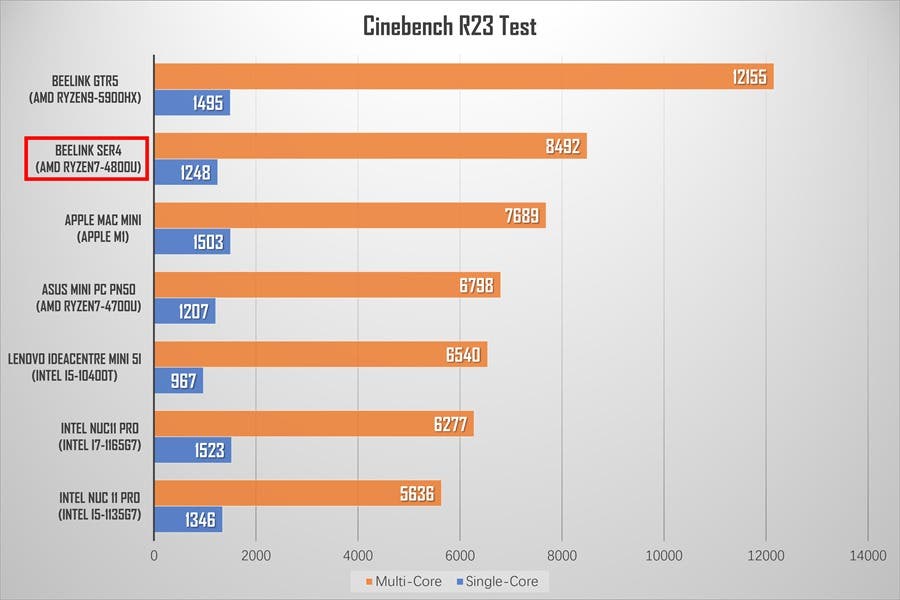 As you may see from the benchmarks, the SER4 is be able to deal with reasonably intense graphic workloads without significant performance halt. With that said, please bear in mind that the SER4 will not be enough if you’re an avid gamer, in need of highest fps, huge speed and close to zero lags. 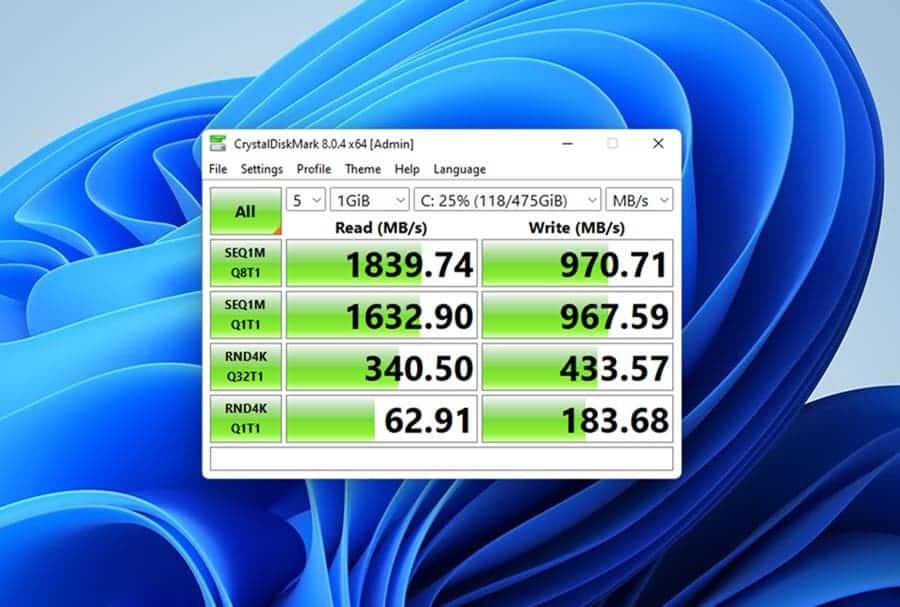 As I mentioned earlier, the SER4 is truly a solid HTPC, with no problem decoding any video formats you may need, including a few 8K @ 60fps and 4K @ 120fps videos. Streaming 4K YouTube Videos in Chrome, this machine does not skip a bit, either. I didn’t have the chance to try some 8K streaming – but who needs it anyway?

One more interesting feature of this Lilliputian device is its heat dissipation and the power it consumes. It’s only 5W at idle performance, with a maximum of 39W when doing heavy duty graphics editing or some addictive gaming. On the other hand, it’s not the most quiet mini PC out there. Every time it starts working the fans go off like an airplane for 5 seconds prior to boot. This, in order to cool the small CPU chamber, so this could be a bit annoying if you’re used to working with an Apple Mac Mini M1 that’s silent 24 hours / day. 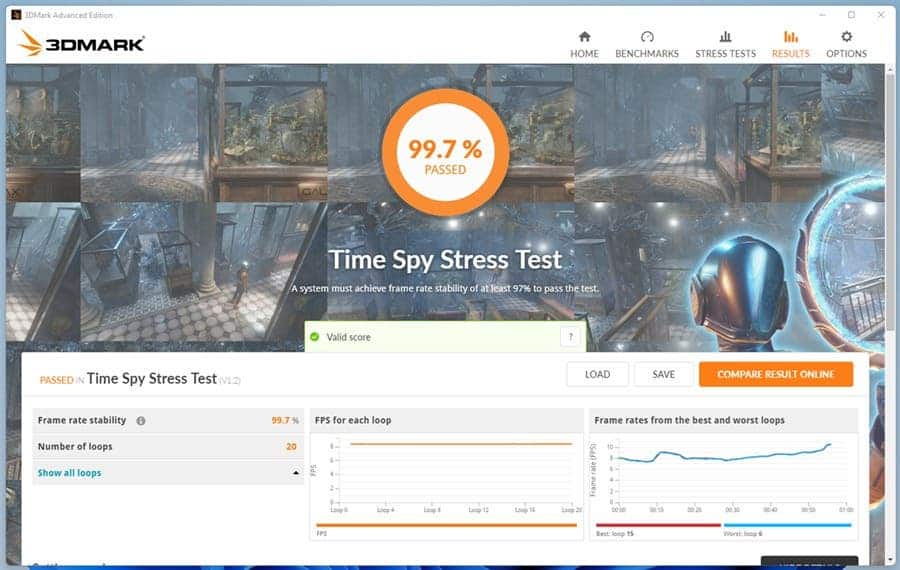 Thanks to the efficient cooling, the SER4 is also extremely stable, it passed the 3DMark Time Spy Stress test with a very high mark.

I don’t think anyone could be disappointed with the connectivity features of the SER4. The device supports the latest WiFi 6E technology, also known as WiFi 6 Extended. Such thing allows the PC to use the 6GHz band, which in return brings more bandwidth, faster speeds, and lower latency, opening up resources for future innovations like AR / VR, 8K streaming, and more. It also packs a typical Ethernet jack for typical wired internet access. 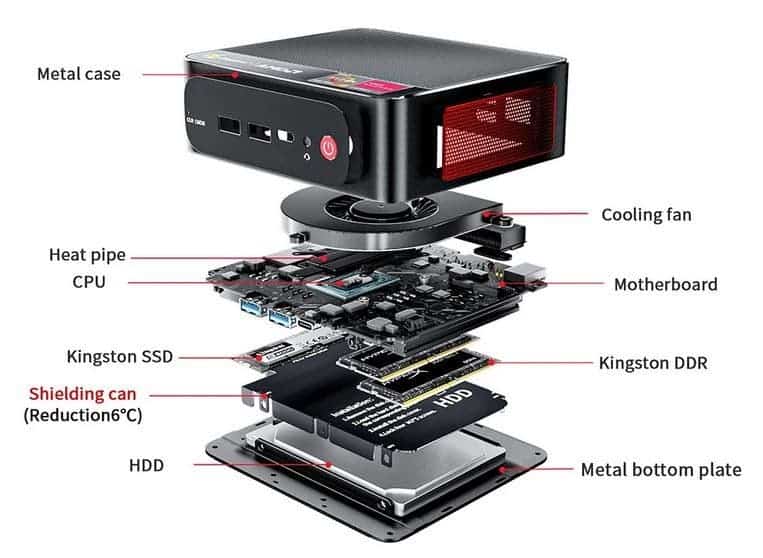 Software: comes with a licensed, clean copy of Windows 11 Pro

I was quite pleased to see that during the first boot my SER4 came with a licensed version of Windows 11 Pro with no pre-installed 3rd party applications or bloatware that you need to uninstall. This means that the average user will have no trouble to use it, make the necessary updates and take advantage of their new features.

If you’re not into Windows however, you can easily install a fresh copy of Ubuntu and see the little beast fly! I partitioned the SSD, and installed Ubuntu using the Ubuntu 20.04.4 ISO as dual boot. After installation and updates a brief check showed working audio, Wi-Fi, Bluetooth, Ethernet, and video output from the USB Type-C port. Everything worked like a charm. 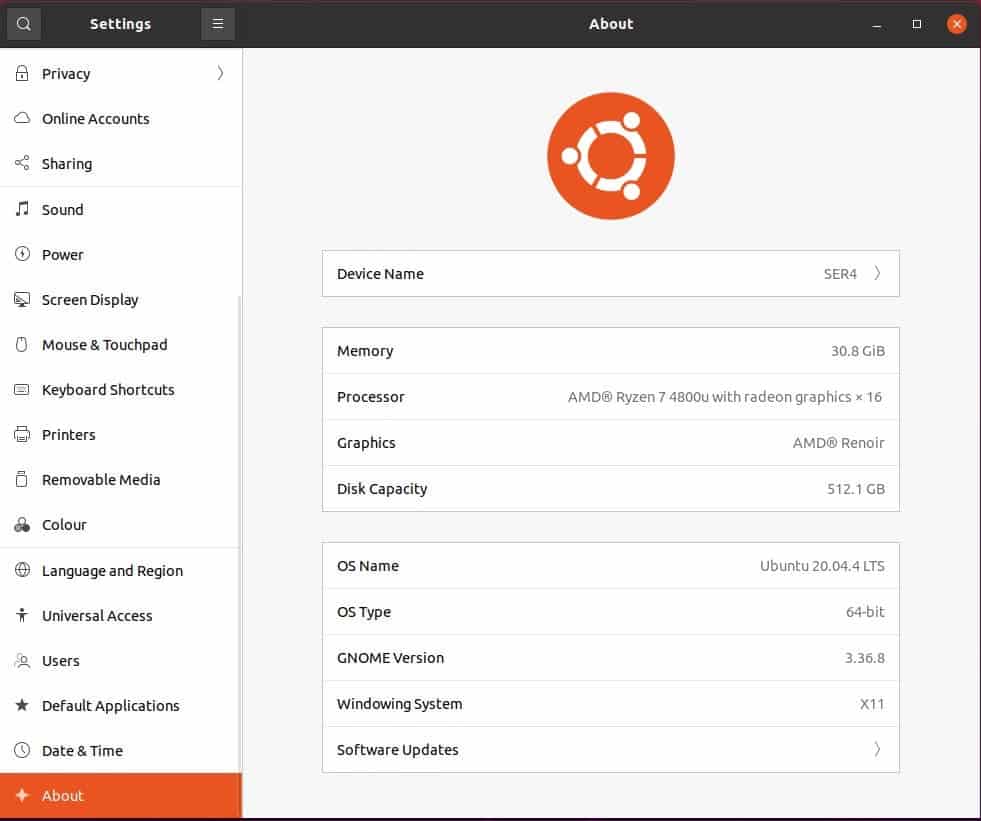 With a price of around $ 600, the Beelink SER4 is among the VFM deals in the mini PC market. The choice of a Ryzen 7 CPU (from the 4000 series) is good when going against Intel powered mini PCs. Especially those with the Intel Core i5. It’s not as powerful as its “Ryzen 9-5900HX” brother, but it’s more affordable and power-efficient. 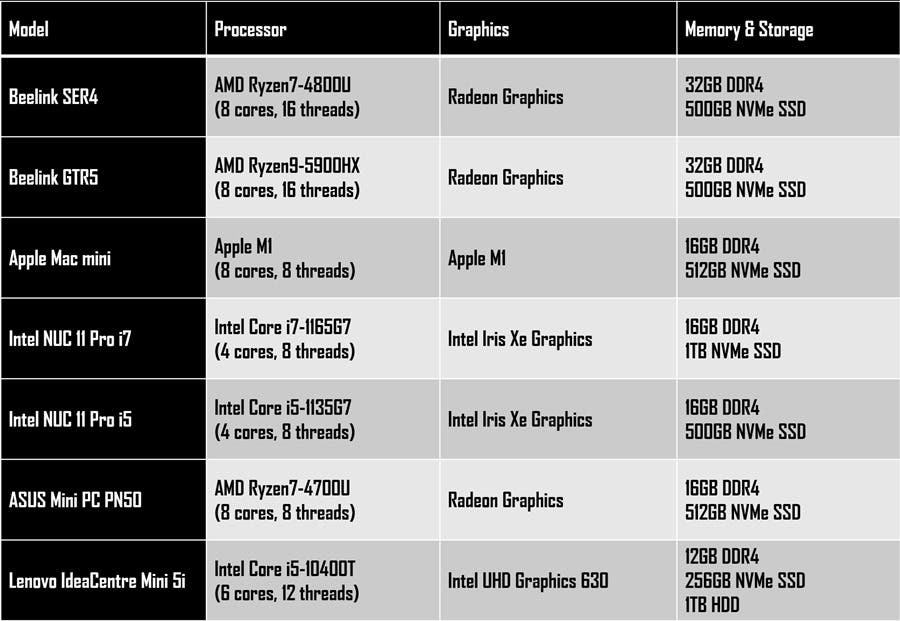 The closest competitor to the SER4 is the i5-1135G7 powered Intel NUC 11 Pro. As you can get the latter with 8GB memory and 500GB SSD on the same budget. The NUC comes with more versatile Thunderbolt 3 ports, which is a must for some users. However, in terms of horsepower, very few Intel powered models can really match the SER4.

My opinion regarding Beelink SER4

After testing the Beelink SER4 4800U mini PC we can say that it’s one powerful mini PC. This little wonder provides an AMD Ryzen 7 4800U processor with a Vega 8 GPU that defends itself quite well. It has three 4K video outputs and Gigabit Ethernet port to transfer large files. It can be hung on its VESA bracket or placed anywhere on your desk without taking up space as well. 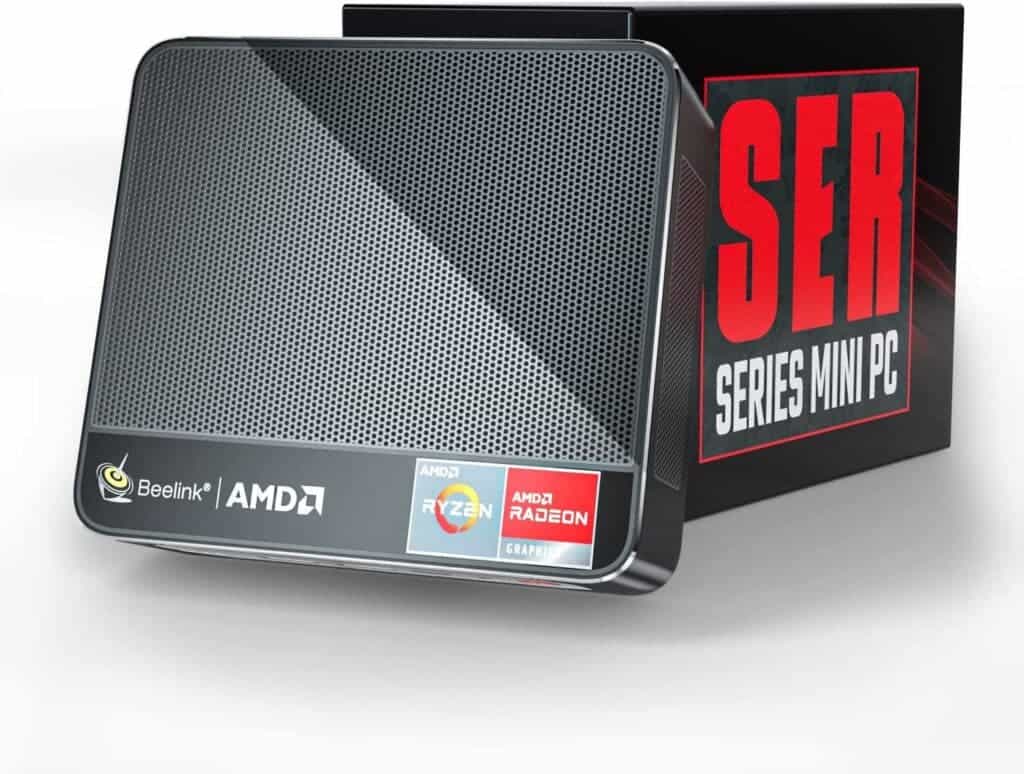 The Beelink SER4 4800U offers a high computing power that makes it suitable even for any heavy task. It’s packed with a 512GB Intel M.2 2280 NVMe SSDoption to mount a SATA 3 2.5 ″ disk and 2 SODIMM slots that allow easy expansion of RAM.

As I previously mentioned, it also stands out for integrating Wifi 6E with good performance. It boasts a cooling system with a fan that we will only hear running heavy games or launching demanding calculations.

My opinion is that the Beelink SER4 4800U is a powerful and very compact mini PC. This computer is sufficient for professional use in many applications and allows you to run several demanding games.